Mexican Appetizer or a Meal?

Mexican Appetizer or a Meal?

Many of Mexico’s more traditional recipes come from the Aztecs and Mayans but it’s the Spanish that influenced the Mexican food we love and enjoy today.  As the Spanish colonized Mexico they introduced new ingredients and cooking methods that became part of the Mexican culinary tradition. Over the centuries regional adaptations of Mexican food has evolved and the cuisine has become such an important part of the culture that in 2010 it was added to the intangible cultural list by UNESCO.  Only two other types of cuisine join us on this important list: Mediterranean and French.

Who doesn’t love Mexican food?  The palette of ingredients is so colorful, fresh and flavorful that it explodes in your mouth!  This cuisine is so much fun to cook and enjoy that it’s hard not to want to keep trying and tasting new recipes.  There are endless possibilities and ingredients that can be used to explore and express yourself, in the kitchen, while serving up an amazing table full of color, texture and just plain happiness!

Many popular Mexican dishes can be served as an appetizer at gatherings or served as a creative main dish any day of the week.  Nachos, quesadillas and ceviche are three of my favorites because the recipes can be adapted so easily or turned into a main dish.  So today we want to explore these three popular dishes and ask the question; are they an appetizer or a meal? 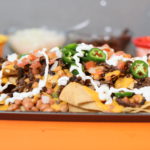 This amazing finger food is really about what you put on them.  In 1949 a restaurant owner named Ignacio “Nacho” Araya created nachos from ingredients he found in his kitchen and called it Nachos Specialties, which he later shortened to nachos….the rest is history.  The base to this dish is the tortilla chip and the variations of what you put them are endless!  Almost any combination of meat, cheese and veggies can be used to create unique and fun recipes that are a crowd pleaser every time!  I personally love nachos as a meal and consider it the ultimate comfort food. I like to top my tortilla chips with carne asada, black beans, diced onion, chopped tomato, diced jalapeno and of course cheese! 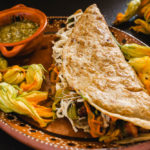 This is probably the most popular Mexican appetizer, but did you know that in central Mexico, quesadillas don’t have cheese as the main ingredient.  The main filling is usually beef, chicken, pork or other cooked meat, topped with cheese and placed in a tortilla, which is then pan grilled on both sides.  A quesadilla reminds me of the ultimate warm Mexican sandwich that is easy to prepare with almost any combination of ingredients and only limited by your imagination!  Serve at your next gathering as an appetizer or try making it as a main dish with your favorite beans, shrimp and veggies. No matter how you serve it garnish with guacamole, sour cream and pico de gallo and it’s a hit every time! 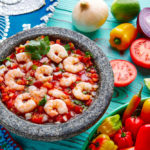 Many think this dish is difficult to make because it looks fancy but it’s actually super easy to prepare.  Typically it’s shrimp or fish based but other types of seafood can be used or mixed together to create more interesting variations of this classic dish.  Mix up seafood, veggies, jalapeños, lime juice and a few spices together in a big bowl and let the lime do all the hard work! In as little as 30 minutes you can have this fresh and light dish ready to serve as an appetizer or add it on a tostada with a side salad or sliced avocado and you’ll have an easy healthy dinner in no time and in all honesty probably forget your eating a party food!

Many Mexican dishes lend themselves well as an appetizer or a meal and this short list is by no means all-inclusive of all the options out there for entertaining or feeding your family.  Let’s give an honorable mention to taquitos, sopes and grilled peppers! These are all also easily made and almost any combination of ingredients can be used to serve them up. So, whether you are making any of these dishes for a party or as a regular meal for your eager family rest assured you will arouse hunger and create anticipation for these delicious Mexican treats.  The most important thing is to love those around us and keep our traditions alive and being creative and expressing yourself through cooking is a great way to do that. The Spanish influenced our culture so many centuries ago so now it’s your turn to put your own sazon and adapt old recipes by introducing new ingredients but…..don’t forget the salsa!  See you in the kitchen!